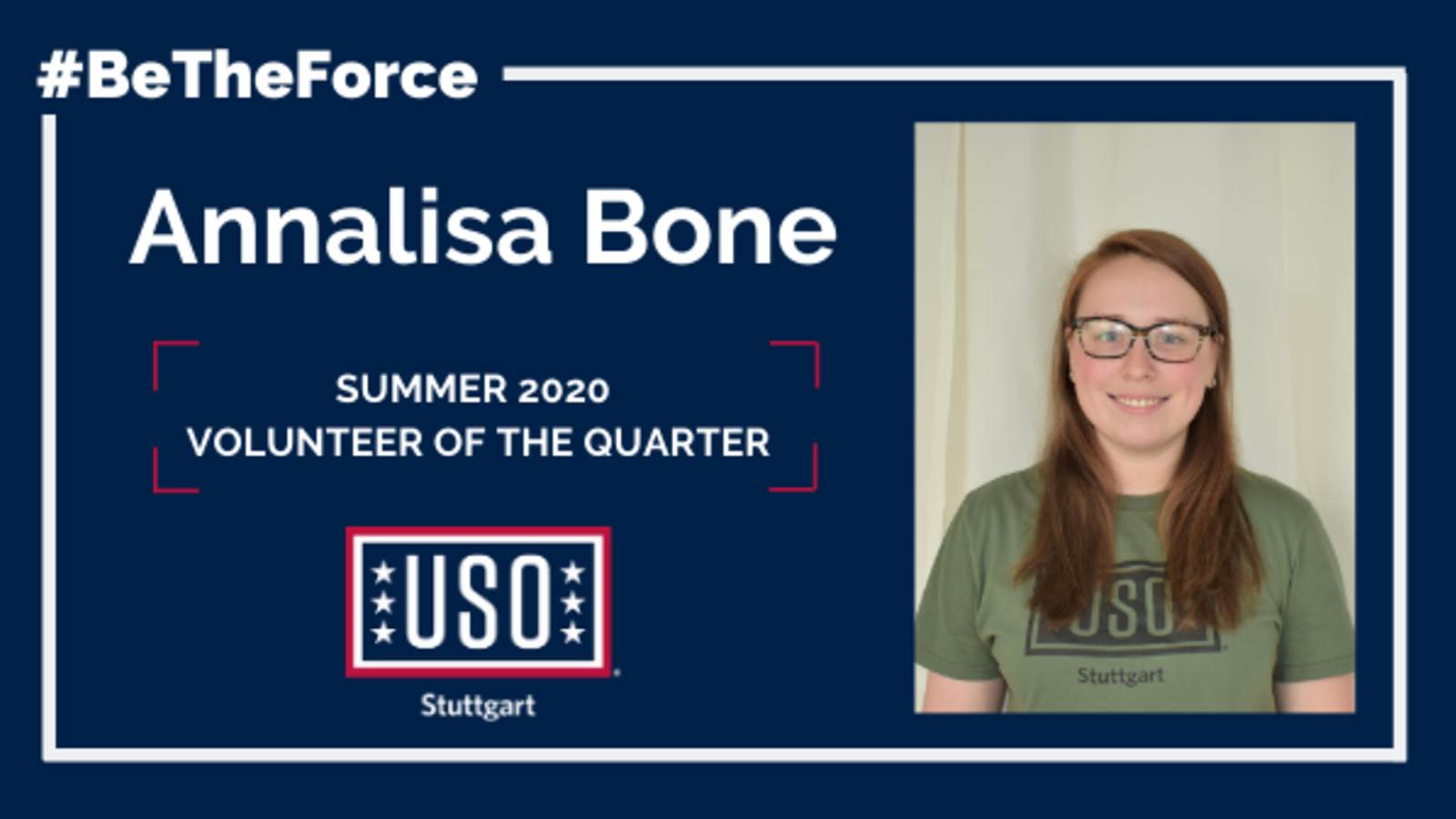 Annalisa came to volunteer at USO Stuttgart after she decided that spending her days at USO Stuttgart would be a great way to meet new people, give back and refocus after facing the difficulty of finding employment that so many spouses experience in Stuttgart. She began building relationships right away by picking on our Program & Volunteer Coordinator and joking around with the other volunteers. She fit right in!

The shutting down of the center did not stop Annalisa. She was one of the first to ask how she could help. She contributed ideas for the challenges, attended Sip & Shares, Coffee Connections and consistently made us laugh with her volunteer submissions for our Volunteer Takeover Friday Features. That spunky personality of hers was on full display as she submitted Toilet Paper Roll Bowling, steak for ramen week, cereal treats for her dogs, Fort Kim-Li, Captain Cardboard and so much more. She has helped us reach almost 600 TSI’s by participating in our Volunteer Challenges. When our Programs and Volunteer Coordinator had the idea to host Volunteer Orientation virtually, Annalisa fully supported it and signed up to assist. On one Coffee Connection when a person no one knew joined and realized everyone else on the call knew each other, Annalisa told him he had to be a volunteer and then he would know everyone. She was pretty insistent and let him know orientation was the next day. As the call ended she told him, “See you tomorrow!” He showed up for orientation the next day and gave full credit to Annalisa. Her assistance with Online Volunteer Orientation has helped recruit 8 new volunteers. When Kymberlee wanted to start hosting Story and Craft Time virtually, Annalisa was happy to support by manning the Zoom controls so that Kymberlee could focus on the kids, story and craft. Annalisa of course made a butterfly too and everyone had a great time. When we decided to do the ConGRADulations Packs, Annalisa was the first to sign up to help pack. We reached 200 families through that program. As we prepared to reopen the center, you guessed it, Annalisa showed up to help clean and move furniture. As we discussed signage and how we needed people to STOP and read the signs, the crazy thought process that followed led to our reopening rap that 238 people loved enough to watch for at least 1 minute. Annalisa was the OG back up dancer for that and absolutely encouraged our Programs and Volunteer Coordinator to perform it live. In preparing the center, Annalisa made a trip to the basement where she saw the Care Package area. She decided right then and there she wanted to be the Lead Volunteer for that program. She took the time to sort out all the expired products, reorganize the shelving and learn all about the process. She is making plans to promote that program and reach more service members. She has even jumped in to cover the front desk when she just happened to be dropping something off and one of our team members wasn’t feeling well. She currently has donated 171 hours of her time to USO Stuttgart.

Annalisa is a rockstar volunteer. We are so thankful that she never lets any obstacle stand in her way of helping us carry out the USO mission.